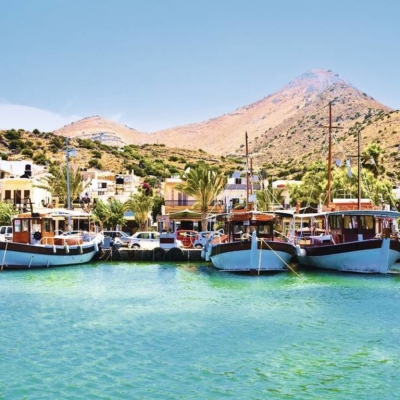 Elounda (Greek: Ελούντα, translit. Elúnda), alternatively transliterated as Elounta or Elouda, is a small town on the northern coast of the island of Crete, Greece. It is part of the municipality of Agios Nikolaos, until recently (2010) belonging to the prefecture of Lasithi and nowadays the periphery of Crete.

Elounda is formed of seven villages and an uninhabited island area. The village of Schisma is by far the most populated one and is often understood as 'Elounda Centre'. The community of Elounda has a total of 2,193 inhabitants according to the 2011 census. The areas making up the community are (at least since the re-organisation of 2011-01-01) with Greek names and head count:

The road into Elounda from Agios Nikolaos is approximately 12 km in length and follows the shore as it climbs to the top of a small mountain. On a clear day it is possible to see the whole of Mirabello Bay and all the way to the eastern tip of Crete.

The small fishing village of Plaka (Lasithi), which overlooks the island of Spinalonga and the Kolikithia Peninsula, is located a mere 5 km from the main square of Elounda heading north away from Agios Nikolaos.

It is also the closest major town to the former leper colony of Spinalonga (Greek: Σπιναλόγκα), located on an island officially named Kalydon (Greek: Καλυδών).

Elounda is a famous tourist attraction, heavily visited by VIPs for its seaside luxury resorts. Prime Minister Andreas Papandreou used to spend his summers in Elounda; today, it is visited almost every year by the royal family of Saudi Arabia.

The earliest recorded settlement at Elounda was the ancient Greek city of Olous, whose people were in intermittent conflict with the citizens of Dorian Lato, until a peace treaty was eventually reached.[3] Elounda has a later history as part of the Venetian era. Elounda has changed considerably during its lifespan. The bulk of the ancient city of Olous was reclaimed by the sea towards the end of the Ancient Greek period and is still visible, in part, when diving in the bay of Elounda.

During the early 1900s, Elounda acted as a stopping off point for lepers being transported to the leper colony at Spinalonga.

In 1984, the President of France, François Mitterrand, and Colonel Muammar Gaddafi of Libya met in a luxurious Elounda resort to discuss conflict resolution in Chad.

Bus services in Elounda are operated by the KTEL (Greek: ΚΤΕΛ) bus company, with scheduled services running to Plaka (Lasithi) and Agios Nikolaos throughout the day.

Elounda was used for the filming of the popular BBC television series Who Pays the Ferryman? in the late 1970s.

It is the setting for the Belinda Jones novel Out of the Blue.

It features in Victoria Hislop's novel The Island, the novel which has also been adapted for Greek television and aired as a mini series in the winter of 2010-11. It also features in 'Yannis' by Beryl Darby.

Hislop, Victoria (2005). The Island. Also see The Moon-Spinners by Disney. Together with 'The Island', by Victoria Hislop there is also available a much more substantial work on the same subject called YANNIS by Beryl Darby who also wrote the first guide book to Spinalonga.